In recent years, government agencies and community organizations have made concerted efforts to reduce drug abuse and its disastrous effects on families and communities throughout Ohio. Despite these efforts, addiction to illicit street drugs, prescription medications, and alcohol continue to threaten the stability of individuals, family cohesion, and communities across the state. As a result, thousands of people need services and recovery programs every year. Yet, only a fraction of those struggling with a substance use disorder (an addiction to drugs or alcohol) reaches out to get the professional help necessary to heal. There are various reasons for this, but it often comes down to feeling overwhelmed and alone in the struggle against addiction.

Lakeview Health offers extensive substance abuse treatment programs. Our facility is located in Jacksonville, Florida, making it an ideal location to focus on healing and avoid stressors and triggers around one’s home in Ohio.

Ohio consistently leads the nation in terms of drug abuse, especially prescription drug abuse. The CDC ranks the state among the top 5 across the United States regarding the number of residents per 100,000 suffering from various drug or alcohol addictions.

Ohio substance abuse statistics reveal the need for addiction treatment. There are numerous addiction treatment programs tailored to meet the needs of each individual struggling with substance use disorder. For some, residential treatment is the best option, but for others, an intensive outpatient program or partial hospitalization program would work best. What matters most is reaching out to a professional facility offering comprehensive care and a full spectrum of treatment like Lakeview Health.

Alcohol abuse is a common problem throughout the United States, with huge ramifications, including but not limited to creating financial burdens on taxpayers due to vehicle accidents and violent crimes.

Additionally, the number of motor vehicle accidents in Ohio involving alcohol is well above the national average. This creates a huge problem with the safety of residents and increased expense in making necessary repairs caused by alcohol-related traffic accidents.

In the last few years, nearly 300,000 Ohio residents were addicted to illicit drugs, but these numbers exclude the growing trend of prescription drug addiction. One of the driving factors behind the opioid epidemic that has hit the entire nation, but especially hard in Ohio, has been the over-prescribing of opioid painkillers.

This overprescription was encouraged sometimes criminally by certain pharmaceutical companies responsible for providing the medications. In Ohio, providers wrote 53.5 opioid prescriptions for every 100 persons compared to the national average of 51.4 prescriptions. This is just one of the factors contributing to Ohioans’ struggle with opioid use disorder.

Opioids are a class of prescription drugs that include hydrocodone, oxycodone, methadone, and morphine. Recent years have shown a huge spike in opioid drug addiction among Ohio residents.

Addiction is becoming a greater concern for people younger in age. It can happen to a teen being treated for a sports injury just as easily as an adult looking to escape from life’s pressures, making it a tricky problem to overcome. Additionally, many people suffer in silence or are ashamed of their addiction, making it hard to tell how truly widespread this problem has become.

Marijuana laws have seen major changes over the last decade. From state to state, the sale, possession, and use of marijuana varies. In some states, the substance is legalized, while in others, it is decriminalized (which means there are still restrictions). In the majority of states and at the federal level, marijuana use is illegal. However, much in the way alcohol is ubiquitous, marijuana use is becoming more common. As it does, the danger of individuals abusing the substance and developing a marijuana addiction rises. While marijuana doesn’t cause a physical dependency, it can lead to serious, negative health effects and psychological addiction (what professionals call a process addiction).

The abuse of other illegal drugs varies widely from state to state, depending in part on what is most easily accessible in certain areas. According to the Ohio Department of Health, heroin abuse is quickly gaining ground in Ohio and may even soon surpass the abuse of opioid-based prescription drugs. Additionally, this creates the added problem of drug trafficking. This compounds the negative effects of illegal substance abuse, leading to an increase in violent crimes.

Lakeview Health offers extensive substance abuse treatment programs. No matter the drug you or a loved one is struggling with, our team of professionals can help. Some of the substance use disorders we treat include:

These are just some of the addictions our experienced and compassionate team of counselors, therapists, and medical professionals can address. With our support, individuals can heal and lay the foundation for a lasting recovery.

In many cases, an individual who is addicted to one substance may be addicted to others simultaneously. The sad reality is that the synergistic effects of these drugs can be devastating and can deepen the addiction, making it harder for the individual to break free from their drug abuse. For example, it is not uncommon for individuals addicted to prescription painkillers to abuse alcohol simultaneously, consuming alcohol with these prescription medications can drastically intensify their effects.

Statistics show that at least a third of those being actively treated for abusing one substance admit to having used other addictive substances simultaneously. Breaking free from multiple drug or substance abuse addictions simultaneously is especially tough. 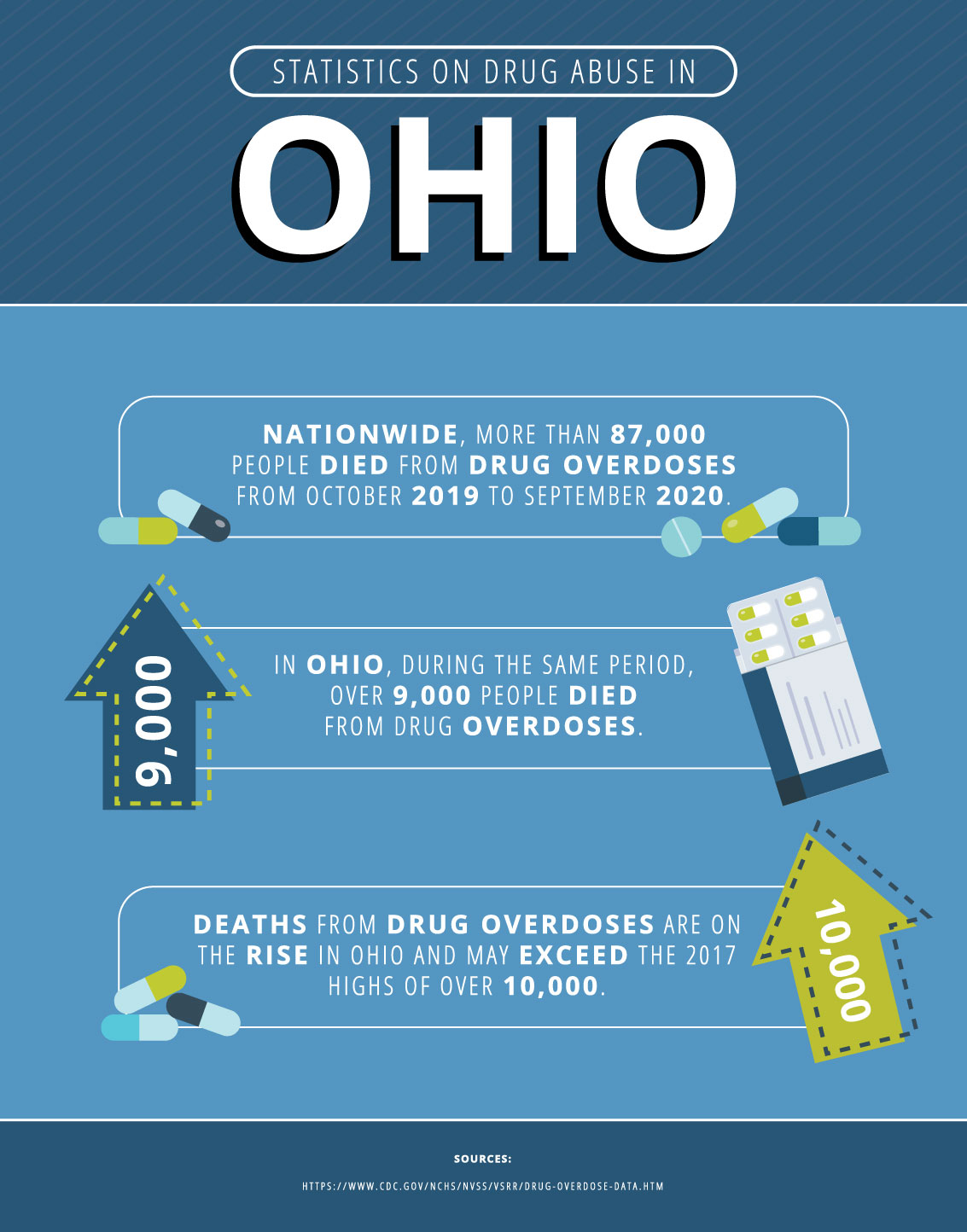 One of the best ways to understand how substance use disorder impacts our society is by looking at the number surrounding drug and alcohol abuse. You don’t have to experience the effects of addiction firsthand to see how it impacts individuals, families, and communities. Getting a better understanding of Ohio substance abuse statistics allows you to feel the urgency in helping people find the support they need to heal.

Although Lakeview Health is located in Florida, our treatment facility welcomes individuals from across the nation. We understand that life is sometimes tough to handle, and addictions to illegal or prescription substances should not be a source of shame or suffered through alone. Our rehab programs are here to offer support and a path to recovery.

Our team understands the unique challenges of substance abuse and addiction and its recovery. We aim to make you as comfortable as possible as we help you through the various hurdles of recovery from substance addiction.

Compassionate help is possible, so please do not suffer alone. If you or a loved one is battling the uphill fight of drug addiction and substance abuse, call our treatment center’s admissions team today at 904.677.5010 to find out how we can help you in your fight for freedom from addiction.