What Is Medical Detox?

The goal of a medical detox center is to help people achieve sobriety safely and prepare them for the next steps in addiction recovery. Medical detox centers accomplish this goal by providing targeted medical treatments.

Certain prescription medications and therapies can alleviate the discomfort of drug or alcohol withdrawal symptoms, easing the way toward abstinence. While detoxing from drugs is never easy, medical detox can make the process much more comfortable.

Unlike residential addiction treatment centers, detox centers focus primarily on physical health, rather than mental health. They are led by board-certified doctors, nurses, and providers and have specially trained addiction support professionals on staff. While counseling and peer support play an important role in detox, the primary goal in this initial stage is to help people feel better physically.

People who stop drug or alcohol use after prolonged dependence are often physically ill. The acute effects of withdrawal can last for days or weeks, and they often require medical intervention.

Medical detox has three primary stages that help people achieve abstinence and move on to the next steps in their recovery:

When a patient first enters medical detox, they will undergo a thorough evaluation to understand their specific treatment needs. This includes gathering information like:

With this information, the detox team can determine the best treatment course for each individual.

The next step of medical detox is stabilization. With the information gained during the evaluation stage, the detox team designs a medical intervention plan to alleviate the symptoms of withdrawal the patient is experiencing. The stabilization stage takes up the majority of a patient’s time in detox, as withdrawal symptoms can last for several days or weeks.

During this stage, patients are monitored 24 hours a day to ensure that everyone at the facility is safe and comfortable. However, staff do more than help patients with medications; they are there to provide support when needed and to look after all the needs of the patients in their care.

The final stage of medical detox is discharge planning. While detox can help people to feel better physically, it is typically not enough to create lasting sobriety. It must be followed by residential or outpatient addiction treatment so patients can learn how to manage cravings and any co-occurring mental health disorders. Addiction treatment programs can help to address the psychological, social, and spiritual aspects of addiction recovery.

As such, professionals at medical detox centers can facilitate a patient’s entry into addiction treatment. They can help patients determine what level of care is right for them, communicate with their desired treatment center, and prepare the patient for what comes next in their recovery process.

“Coming here may seem like a luxury you can’t afford, or like time you can’t take off. But when compared to the rest of your life, the time you spend here is nothing, and it may make all the difference. If you make an honest effort, you will get so much out of this place, I promise.”

How Long Does Medical Detox Last?

The length of medical detox depends on a variety of factors, but it typically lasts between a few days and a few weeks. Medical detox ends when a person has fully recovered from the acute effects of drug withdrawal and has a clear mind to enter addiction treatment.

As such, some people may feel better faster than others, depending on factors such as:

Medical detox is inherently flexible, allowing people to recover on a personalized timeline.

People with mild withdrawal symptoms may only need to spend a few days in detox before starting addiction treatment. In contrast, people attempting to quit long-acting drugs such as methadone may require prolonged detoxification.

People with substance use disorders of all kinds can benefit from medical detox. Each drug of abuse has a specific set of withdrawal symptoms, and medical detox can cater its services to each patient’s particular needs.

Alcohol is one of the most dangerous substances to withdraw from without medical intervention. Not only are the withdrawal symptoms intensely uncomfortable, but severe alcohol withdrawal can cause life-threatening seizures and delirium.

Additionally, long-term alcohol addiction can result in delirium, hallucinations, and vitamin deficiencies when alcohol use stops. These symptoms can be avoided with adequate treatment in a medical detox center.

The symptoms of alcohol withdrawal syndrome include:

Almost everyone with alcohol use disorder will experience these symptoms when detoxing, but discomfort can be reduced or eliminated with medication.

Severe alcohol use disorder can result in an even worse set of withdrawal symptoms, known as delirium tremens (DTs). People who experience DTs are experiencing a life-threatening medical emergency and require medical intervention in order to recover.

Symptoms of delirium tremens include:

In medical detox, these symptoms are treated with specific medications that can reduce the risk of seizures and keep the patient calm. Rising body temperature and other adverse symptoms can be closely monitored.

Since benzodiazepine withdrawal is a life-threatening condition, there are specific safety protocols that staff members follow when a person with a benzodiazepine addiction enters a medical detox center. Left untreated, people withdrawing from benzodiazepines can experience intense seizures that often result in death.

As such, people starting benzodiazepine detox are treated with a process called a medical taper. During this process, progressively smaller benzodiazepine doses are administered on a timed schedule by medical professionals. A medical taper is designed to avoid abrupt changes in benzodiazepine use and gradually ease the body off the drug.

While opioid withdrawal syndrome isn’t typically life-threatening, it is a crippling and worrisome condition. Without medical intervention, many people abandon their attempt at achieving sobriety to find relief from their intense withdrawal symptoms.

Withdrawal symptoms from opioids include:

The experience of opioid withdrawal has been compared to that of an intense bout of flu, as it shares many of the symptoms of this common illness.

Fortunately, opioid withdrawal is one of the most treatable withdrawal conditions. Targeted medications like buprenorphine can drastically decrease the intensity of withdrawal symptoms and in some cases, relieve them entirely.

Stimulant drugs include illicit drugs, such as cocaine and methamphetamine, and prescription ADHD medications, such as Adderall, Vyvanse, and Ritalin. Stimulant withdrawal symptoms include:

Medical detox can help people recovering from stimulant use disorder to rest, recover, and recuperate before attending addiction treatment.

People with a marijuana use disorder can also have several intense withdrawal symptoms. This is particularly true if they have been using high-potency marijuana, edibles, or THC concentrates, which can deliver massive amounts of the active ingredient, THC, in a short period of time.

Treatment for marijuana withdrawal at a medical detox facility helps people recover from these symptoms, clear their minds, and prepare themselves for further addiction treatment.

Does Medical Detox Differ for Men and Women?

While the medical interventions offered at a detox are identical for men and women, the best medical detox centers will offer gender-specific options. This allows patients to build connections with people of the same gender who are also striving toward addiction recovery and helps people feel safe in their environment.

Men may struggle to talk about their withdrawal symptoms in the presence of women but not in front of other men. Women may feel unsafe sleeping under the same roof as men they’ve never met before. Separating detox programs by gender addresses both of these concerns.

What Is Emergency Medical Detox and When Is It Needed?

When people detox from certain drugs, such as alcohol or benzodiazepines, it is a life-threatening medical emergency. If they don’t start the process at a medical detox before their withdrawal symptoms begin, they may need to be treated in an emergency room and hospitalized to ensure their safety during withdrawals.

If you are withdrawing from alcohol or benzodiazepines and begin to feel shaky, the best course of action is to head to an emergency room for immediate medical intervention. It’s better not to take the risk of life-threatening consequences.

If you’re considering starting addiction treatment, these symptoms can be avoided by starting medical detox as soon as you’re committed to starting your new path in recovery. That way, detox professionals can prevent withdrawal symptoms from getting worse by beginning medical interventions straight away. 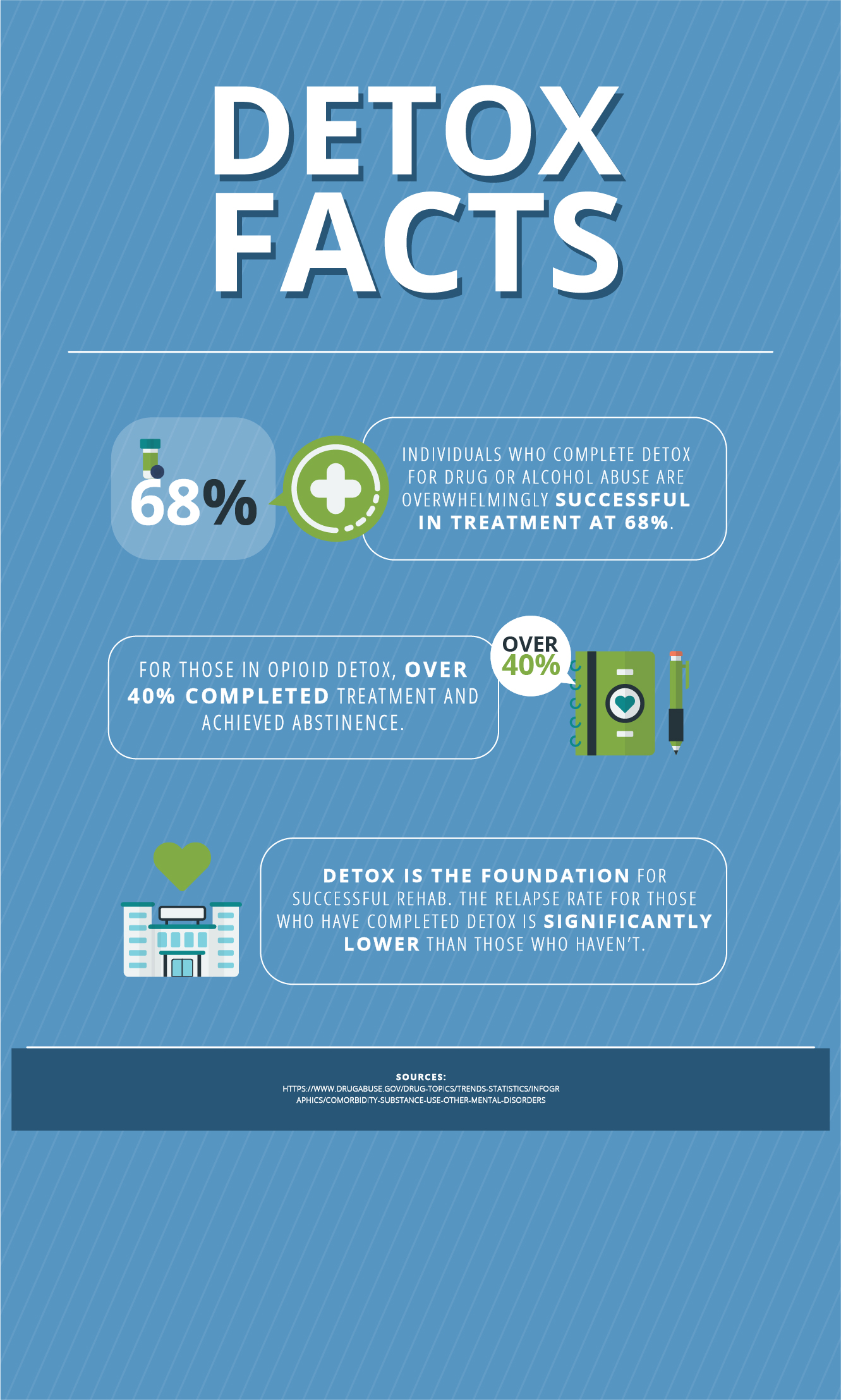 What Happens After Detox?

While medical detox is a vital and necessary step for people struggling with any type of substance use disorder, it is simply not enough to ensure long-term recovery. Medical detox has to be followed by standard addiction treatment, such as residential, partial-hospitalization, or intensive outpatient programs.

It takes a long time to recover from substance use disorders. Recovering from the physical effects of addictive substances is only the first step in recovery. People must still heal from any psychological trauma, social consequences, and maladaptive behavior patterns in order to maintain their sobriety for years to come.

Medical detox paves the way by giving patients a safe space to recover from the effects of substance use. It then facilitates entry into a quality addiction treatment facility, where people can learn the skill and tools for recovery.

Reach Out to Lakeview Health Today

Our Florida facilities provide a serene backdrop for our clients to begin the healing and recovery process. Our well-kept grounds and spacious facilities offer several amenities to help clients feel comfortable, welcomed, and safe during their time in treatment. To learn more about our medical detox center and how our team can help, contact Lakeview Health online today by calling 904.531.3505.