Methamphetamine is a highly-addictive stimulant that rapidly increases dopamine in the brain and goes by street names such as: meth, crystal meth, ice, speed, tina, crank or crystal. The increased dopamine rush from taking meth can have sought-after effects, such as euphoria and increased energy levels. Yet, methamphetamine crosses the blood-brain barrier so effectively that it often results in a crash that leaves the user irritable and depressed. Methamphetamine’s white powder or clear crystals have a bitter taste and no particular smell. Although methamphetamine use can have life-long consequences, treatment is available and can be very effective.

How Methamphetamine in Abused

Methamphetamine is available in many forms and can be taken orally (for example, as a pill), injected, snorted, smoked or inserted. The most common ways to misuse meth have changed over time and depend largely on geographical location and availability. How methamphetamine is misused can also depend on how quickly and intensely the person taking the drug wants to feel its effects.

Smoking, injecting or rectally inserting meth can result in the most harm, by increasing addiction potential and negative consequences, but results in an immediate “rush” that many describe as extremely pleasurable. Methamphetamine goes directly into the bloodstream and then to the brain, resulting in all the dopamine for that dose being released at once. This can be extremely dangerous, as it results in the most dopamine concentration in the brain at once, making misusing methamphetamines in this way the most “rewarding” and the most likely misuse behavior to be repeated. It also has the highest risk of overdose. The “rush” wears off long before the methamphetamine is broken down and the person may take extra doses to prolong or reproduce the high, while still having a high concentration of the drug in their body. This is known as a “binge and crash” pattern.

When a person misuses methamphetamine for increased energy and stays awake for several days by taking more of the drug each time the effects start to wear off, it is known as a “run”. During this time the person may neglect personal hygiene, eating, resting or properly hydrating themselves. This can result in drastic weight-loss and other health concerns.

US Statistics on Methamphetamine Addiction

Despite the many negative consequences associated with methamphetamine misuse, the National Institute on Drug Abuse (NIDA) lists how widely methamphetamine is abused in the US: 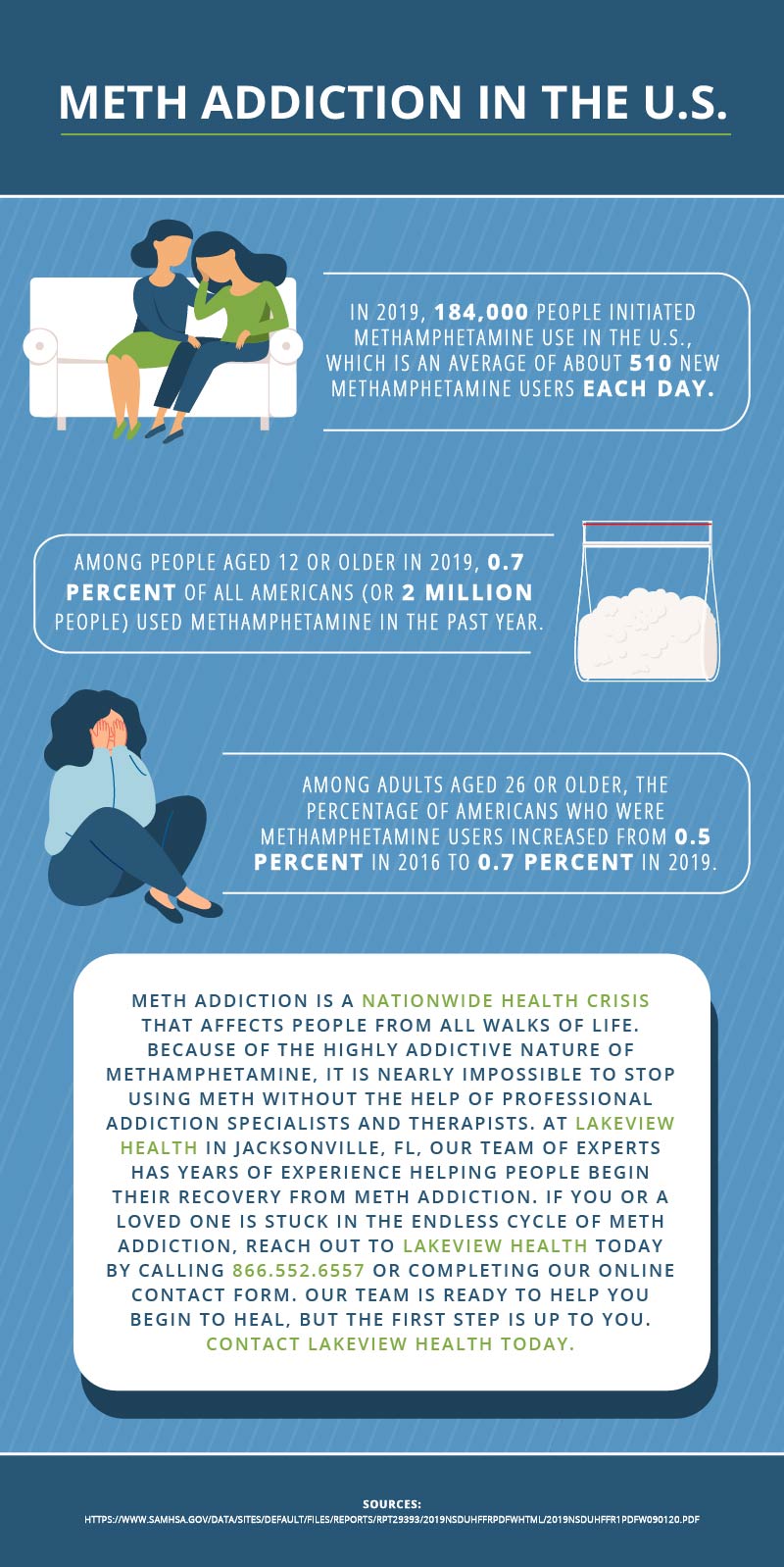 Methamphetamine is a powerful stimulant that can produce feelings of euphoria accompanied by negative side-effects. Exactly how it produces a pleasurable high is not fully understood, but methamphetamine causes increased amounts of the neurotransmitters dopamine, norepinephrine and serotonin in the brain and activates the cardiovascular system.

Short-term effects may include:

Long-term effects may include:

“Meth mouth” is a term that is often used to describe poor dental health in people who misuse meth, yet few studies can explain why meth use may cause more cavities. It may just be a stereotype that perpetuates stigma and shame and may deter people from seeking treatment. Methamphetamine misuse and increased cavities may instead be related to a third factor – poverty. Poverty is a risk factor for both methamphetamine misuse and poor dental health.

Although it is still uncertain how these methamphetamine-related changes to the brain occur, there is evidence that it may be linked to the extreme dopamine concentrations that flood the brain when a person uses methamphetamine (especially via injection, rectal insertion or smoking, which cause a “rush”). Neuroimaging studies show that areas rich in dopamine (such as the striatum) have the most nerve terminal damage. This damage has been linked to impaired movement speed and poorer verbal learning. Damage to areas of the brain that are important in emotional regulation, memory, decision-making and suppressing repetitive habits that no longer serve the person could explain many of the symptoms seen in people who have used methamphetamine for a long time.

Many of these changes seem to be reversible (or partially reversible) if the person stops using methamphetamine entirely, but this takes time and good treatment options. The brain can take a long time to heal, which may be one of the reasons that methamphetamine addiction is so complex to treat and why there is such a high rate of relapse in the early stages of treating methamphetamine use disorder.

Addiction to methamphetamine is known as a stimulant use disorder in the Diagnostic and Statistical Manual (Fifth Edition) (DSM-5). If a person has experienced 2 or more of these symptoms within the past 12 months they should bring it to the attention of a trained medical professional.

Note: The previous two criteria would not be considered for those taking stimulant medications solely under appropriate medical supervision, such as prescribed medications for ADHD or narcolepsy. However, they should still be brought to the attention of the prescribing doctor.

Development of Methamphetamine Use Disorder

Everyone who develops a substance abuse disorder has their own story, but there is no single thing that causes someone to become addicted to methamphetamine. Some risk factors that can contribute to the development of any substance use disorder include:

One of the contributing factors that greatly influences whether someone develops a substance use disorder is the effects that the substance has on the brain. The brain misunderstands methamphetamine misuse as a behavior that should be learned and repeated, because using methamphetamine triggered an increase in the “reward” neurotransmitter (dopamine).

This can be a powerful motivator for a person to use meth again, especially if its use had other sought-after effects, like increased libido, loss of inhibition and/or wakefulness. For example, wakefulness may be used by those who are at risk of sexual abuse or violence to stay awake in dangerous situations. This may be to escape an abusive spouse or family member or just to survive cold nights if the person is homeless. Cases like these emphasize the multi-faceted and complex nature of substance use disorders.

The Dangers of Using Methamphetamine with Other Drugs

Polydrug or co-use is when people take two or more different drugs at the same time. It is relatively common and can be extremely dangerous. Although people may mix any combination of drugs, particularly dangerous examples include:

Meth use can cause anxiety and “jitters”, so some people use alcohol with meth as alcohol will depress the nervous system and “take the edge off”. This is extremely dangerous. One reason is that meth will mask the effects of the alcohol, which may result in the person drinking much more alcohol than they realize or intend to. This may lead to alcohol poisoning, which can be fatal. The mix of a stimulant and depressant is also very confusing for your body to adapt to – resulting in high blood pressure and increased heart rate. This can lead to long-term cardiovascular damage and is potentially fatal.

Benzodiazepines, like Xanax, are another type of drug that is often co-used with methamphetamine to combat the “jitters”. Like alcohol, it is a depressant and combining it with a powerful stimulant can result in cardiovascular consequences like a heart attack or stroke. Benzodiazepines also have a high potential for addiction and have their own dangers.

Some people may co-use two stimulants, such as MDMA or cocaine with methamphetamine. This runs the serious risk of hyperthermia (overheating), heart attack or stroke, all of which can be life-threatening. It may also increase other risk-taking behaviors that come with vastly decreased inhibition, such as engaging in unprotected sex, illegal activities or increased drug use.

“Goofballing” is when people mix methamphetamine and heroin (an opiate). Meth may also be laced with fentanyl (a potent opioid). These mixtures run a high potential for overdose and death. The combination of such a potent stimulant and depressant again puts the body under considerable strain – especially the cardiovascular, nervous and respiratory systems. Again, the risk of heart attack and stroke are high, but the person runs the additional risks associated with opiates and opioids – such as respiratory failure, overdose and addiction to these drugs.

Methamphetamine is associated with increased libido and decreased inhibition and may be used in sexual intercourse to enhance the experience – known as “chemsex”. Drugs like Viagra may be mixed with meth, as meth can cause erectile dysfunction. Drugs like Viagra works by lowering blood pressure, while meth increases it. This combination can be fatal, as it increases the risk of stroke and puts the cardiovascular system under considerable strain.

Symptoms of methamphetamine detox can include:

If withdrawal symptoms are protracted and last for longer than anticipated, the person may have post-acute withdrawal syndrome (PAWS). PAWS is a range of symptoms (potentially including depressed mood, anxiety, irritability and cognitive impairments) that can occur after someone abstains from an abused substance. PAWS can follow detox from meth, opioids and opiates, alcohol and benzodiazepines.

Given the individualized approach to detoxing from meth and the risk of PAWS, it is important to consider seeking treatment for methamphetamine addiction at an inpatient rehabilitation center. One of the benefits of going to an inpatient program, like at Lakeview Health, is the medical detox center, which includes 24/7 access to the emotional support and medical interventions needed to safely detox from substances.

Psychological and Holistic Treatments for Methamphetamine Use Disorder

Lakeview Health’s treatment plans are personalized to meet each person’s unique needs and goals. During an initial assessment, the team will learn more about a person’s experience with methamphetamine, any co-occurring mental and physical health issues and any treatment programs visited previously.

Going through detox is an important first step towards recovery from meth addiction and will be combined with the psychological and holistic therapies offered at Lakeview Health for lasting results. These therapies facilitate personal growth and help to improve communication and relationship skills. They aim to motivate participation in treatment, teach new coping skills, and provide strategies to prevent relapse.

Therapies and services at Lakeview Health include:

The Cost of Treatment

Treatment costs for methamphetamine addiction will vary based on each person’s clinical needs and their insurance coverage or ability to pay out of pocket. Lakeview Health works with most major health insurance providers and our team does everything they can to ensure the insurance verification process is simple and stress-free.

If the patient does not have insurance coverage, the admissions team can work on a payment plan. Providing treatment is the main priority.

Contact Lakeview Health at 866.704.7692 today to learn more about beginning your journey through our meth addiction treatment center.