While addiction is not limited to any one subcategory of people, it poses significant risks to women. It can impact their health, their ability to perform as an employee, and, if they become pregnant while they’re using drugs or alcohol, the health of their child. If this is the case for you or a woman you love, it may be worth seeking a women’s rehab center, such as the Rose, the  women’s treatment program at Lakeview Health. In this program, women can work with other women to identify the source of their addiction. They can also overcome any underlying mental health issues, giving them a chance for long-term recovery.

If a woman you know is battling an addiction to drugs or alcohol, she isn’t alone. Millions of women across the country are also struggling with this condition. However, it doesn’t have to stay that way. When you reach out to Lakeview Health, she will get the care and support she needs to recover and stay sober. For more information about this treatment option and the benefits it provides, please reach out to Lakeview Health today at 904.677.5010.

About the Women’s Rehab Center at Lakeview Health

According to the National Institute on Drug Abuse*, women tend to abuse substances differently and react to substances differently than men. When women struggle with addiction, they face unique needs during treatment. The Rose, our women’s rehab center, can offer you the understanding, support, and guidance necessary to navigate recovery successfully. You’ll work with other women to develop coping mechanisms and understand the challenges you face in recovery.

More than 6% of women struggle with a substance abuse disorder, alcoholism, or addiction each year. Addiction can cause you to compulsively abuse drugs and alcohol even if you want to stop or deal with harmful consequences because of your use. Overdoses are now the leading cause of accidental death in the United States, demonstrating the dangers of recreational drug use and addiction. Unlike certain conditions, substance abuse disorders are chronic and incurable. Addiction is a disease that progressively worsens until you learn how to recover and manage your symptoms.

While our evidence-based addiction therapy programs serve as the foundation of the Lakeview Health rehab experience, we also go to great lengths to ensure women have a comfortable atmosphere that promotes healing.

Though men lead women in alcohol abuse, this gap has decreased over time. Other substances that women are using include methamphetamine, crack, cocaine, heroin, nicotine, and cannabis.

Why there has been an Increase in Women Abusing Substances

One contributing factor is that women had not previously been included in clinical research studies. Federal agencies have made significant strides in recent years to ensure women are included and that specific gender issues are being studied with regard to substance abuse.

Other influences that have contributed to closing the gap between men and women’s substance use disorder over time: more women in the workforce in management and professional positions, higher rates of divorce, and as primary caregivers of young children, women typically have had competing time demands.  Substance abuse also often goes undetected because doctors focus on more complex female biological issues such as weight and metabolic disorders, cancer prevention, pregnancy, heart conditions, and more.

More women are experimenting with and being prescribed various drugs and substances due to anxiety, trauma, and stress also leading to an increase in substance use disorders. According to data by the National Epidemiologic Survey on Alcohol and Related Conditions (NESARC), women also experience a significantly short time between initiation of alcohol use and the onset of addiction. Most women abuse stimulants such as methamphetamine, but prescription opioids are also being highly abused. In addition, the number of women engaging in the non-medical use of opioids has surpassed the number of men by some margin.

How Trauma Plays a Role in Addiction

Research shows that women are at a far greater risk of developing post-traumatic stress disorder than men. Sadly, many hesitate to seek professional help. Instead, they often turn to self-medication as a coping mechanism. As a result, women never receive a diagnosis nor do they address issues such as domestic violence, sexual abuse, or childhood trauma. At our women’s addiction treatment program, we provide trauma therapy to help individuals work through their past traumatic experiences and heal.

What Services Does the Women’s Rehab Program Provide?

Each woman who comes to Lakeview Health is at a different place in her journey to recovery and has different needs. As a result, what works for one woman may not be a good choice for another. To assist women wherever they are in the treatment process, our women’s rehab center offers comprehensive treatment options. “The services we provide at Lakeview Health are better by far than anything I have seen in my 18-year career in addiction treatment. We run gender-specific groups. We have a trauma group for both genders that is very, very therapeutic and effective. We have a pain recovery program. We have a professionals program for people with high-level professional jobs. We employ physical therapists and personal trainers. We have so many assets to bring to the table, and that’s a great thing for our patients.”

One of the primary reasons drugs and alcohol are so addictive is that continued use has a significant impact on the brain. Substances trick the brain into believing that it needs that substance to feel normal, and when it doesn’t have access to the drug or alcohol, the brain reacts by displaying withdrawal symptoms. These symptoms vary, depending on the substance the woman was abusing, but they may include:

It is best to utilize women’s detox services to get through this uncomfortable period. Many of those who try to make it through withdrawal alone will relapse, which can lead to an overdose or death.

After detox, it is often best to enter a residential treatment program, especially for those who are new to recovery. During a residential treatment program, the woman stays at our treatment center 24 hours a day. They surround themselves with other women who will work with them and support them through the early days of recovery. They’ll also attend a range of therapy programs, such as:

If the woman attending our program has already completed detox and a residential treatment program, a partial hospitalization program, or PHP, might be the next step for her. During our PHP treatment option, the woman will be able to attend therapy during the day for a few hours. However, at night she will be able to go home and put some of the strategies she’s learned into practice. We recommend this treatment option for women who have a supportive home environment, as it can be challenging to stay sober at the beginning of the recovery journey without this support.

Once she has finished PHP treatment, we often recommend intensive outpatient programs or outpatient programs as the next step. During this treatment option, she will be free to stay home at night and come to treatment a few days a week. This time is an excellent period to practice coping strategies and facing temptation. The woman has support from her friends in therapy, whom she can turn to if she’s struggling, but she also has the freedom to make her own choices.

Intensive outpatient and outpatient programs should not be the first line of defense if a woman is just beginning her journey to sobriety. Because she spends less time in therapy, she does not have the support structure and coping mechanisms to fall back on when she faces life’s challenges.

Addiction is a chronic condition, and, therefore, it is critical to continue to receive support from others in recovery after treatment. We’ve designed our women’s aftercare programs to help women identify and face the challenges as they come. They can also expect support from the other women in the program. Peer support is a big part of our addiction treatment programs. Therefore, instead of isolating women, they pair together in semi-private rooms. This sense of camaraderie can go a long way in the healing process.

The Rose offers a shared spa setting that allows women to unwind in a calming environment. Featuring pedicure chairs and a massage room, it’s the perfect space for rest and relaxation.

Fitness therapy is a vital part of the addiction recovery process. At the Brittney R. Serpa Wellness Center, women have access to state-of-the-art exercise equipment in a 10,000 sq. ft. building. Furthermore, they can also participate in individualized workout programs from certified athletic trainers.

Addiction therapy approaches should be beneficial for the mind, body, and spirit. Our women’s meditation garden gives clients a safe space to practice mindfulness. The serene garden also features a walking labyrinth.

The Oak Leaf Café gives women a safe space to congregate and share healthy meals. Our dietician team can work with women individually to develop the ideal meal plan based on their preferences and dietary goals.

Although recovery takes commitment and hard work, clients should also have time to relax. The Rose features a lap pool that lets women take a swim in the beautiful Florida sun.

Statistics About Drug and Alcohol Abuse in Women

Drug and alcohol addiction is not limited to one age, one gender, or one economic background. However, young women are at a high risk of becoming addicted to some substance. If a woman you know is struggling with an addiction, encourage her to reach out to a women’s rehab program. Doing so could save her life. 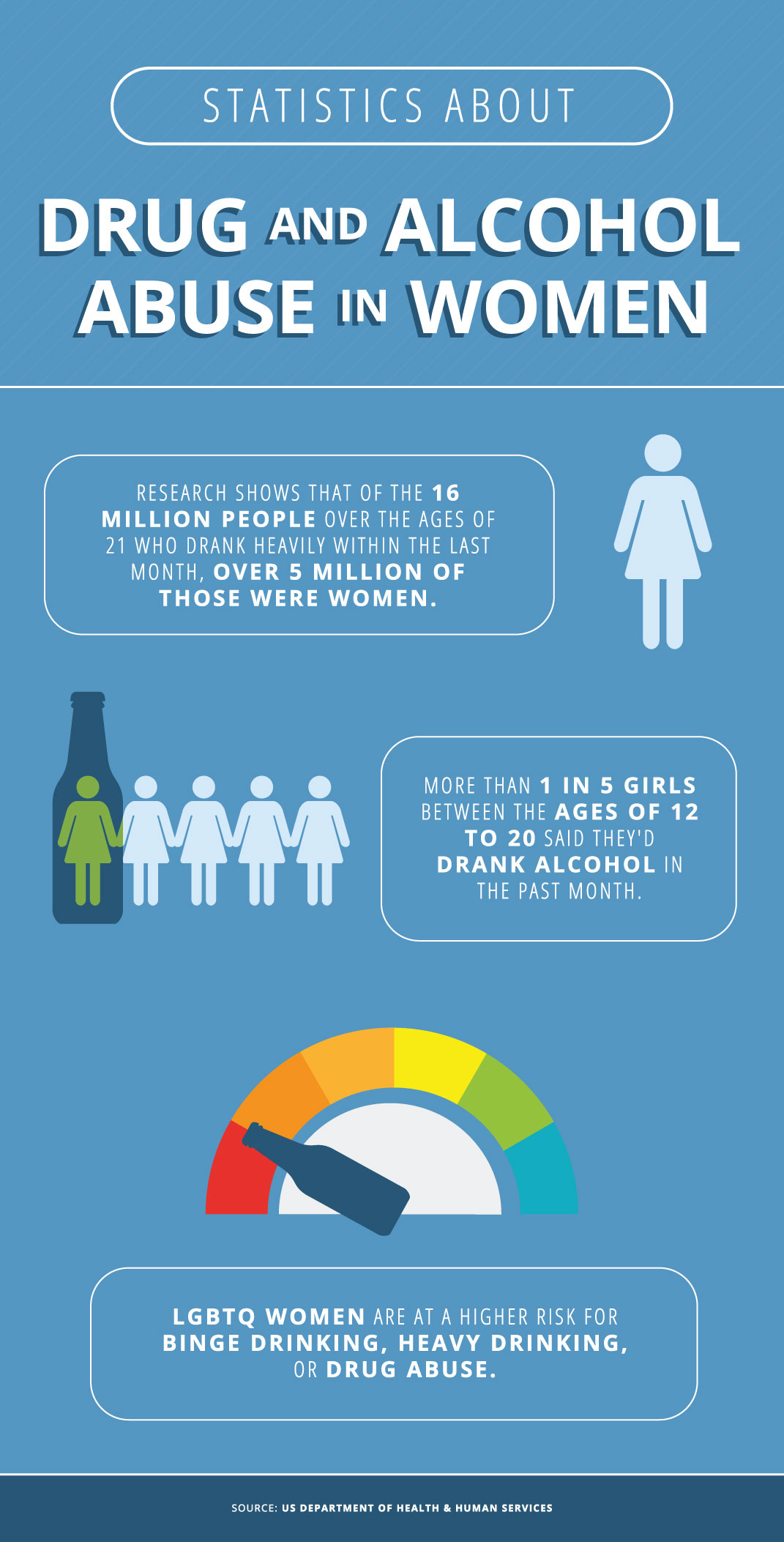 Join Us at Lakeview

Finally, women have to deal with extraordinary issues when it comes to alcohol and substance abuse. Top among these issues are gender and sex. Interestingly, in women, substance addiction tends to develop faster than in men. Our women’s rehab center concentrates more on these influencing factors to give the woman a better chance of overcoming addiction. At our women’s rehab center in Jacksonville, Florida, our main focus is for our patients to get better. As a woman, battling addiction can sometimes be doubly traumatizing. Do not keep the problem to yourself.

When you are ready to begin a substance use disorder treatment program and start your journey toward recovery, turn to our team for the help you need today by calling 904.677.5010. Our admissions team is ready and waiting to help you determine the exact type of care you need.